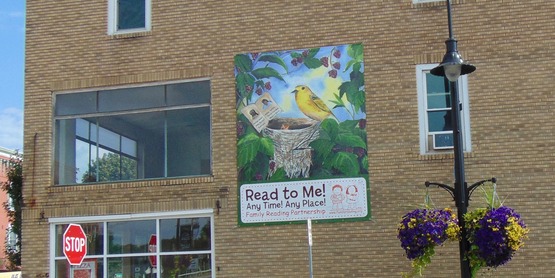 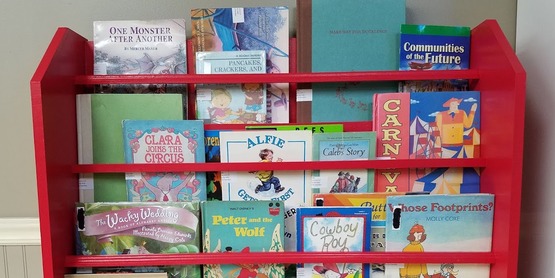 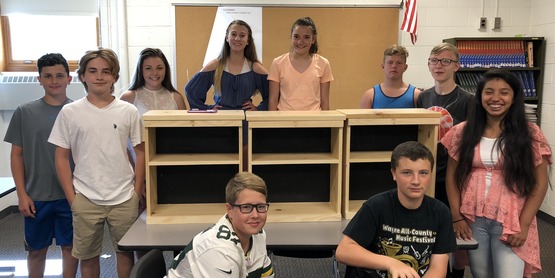 Clyde-Savannah tech students with one of their bookshelves, created with teacher Matt Drahms

When Tom Castellano retired from his position as Clyde-Savannah Elementary School Principal in June of 2014, he had already made headway on the Bright Red Bookshelf initiative. Tom had seen that 20-25% of children entering school were behind in basic skills and awareness of words, not having been exposed to books and reading in the home.

Bright Red Bookshelf, an early literacy program of the Family Reading Partnership in Ithaca, has had success in increasing literacy in both rural and urban communities. The program targets youth in pre-K to third grade by offering free, gently used children’s books in locations throughout communities and encouraging parents to read to their children. Research indicates that academic success is correlated with the number of books in a child’s home from an early age; education level is one of the major social determinants of health, and early literacy is directly connected to academic success.

When Tom and a few other community members became aware of Bright Red Bookshelf, they speculated it would be a good fit for Clyde, Savannah, and Galen.

Because of his passion for early literacy, Tom Castellano became one of the many active participants in the SOAR (Strengthening Our Area Residents) Project, a grant held by CCE Wayne and funded by the Greater Rochester Health Foundation.

Back in May of 2014, Tom completed one of SOAR’s Resident Health Promotion Project applications, in which he requested funding to build seven Bright Red Bookshelves to be placed around town holding children’s books for families to take home. But because of the generosity of a Galen resident who agreed to donate his time and materials to build the shelves, the money was used instead to buy books for each Kindergartner in the Clyde-Savannah school. Summer of 2014, the community and schools banded together and donated about 3,500 books to jump start the project. And since then, approximately 5,500 books have been adopted from those candy-apple-red shelves in the cycle of giving and receiving. In addition, each year our Kindergartners have received new books, purchased and donated by local organizations and businesses.

Early literacy has blossomed in Clyde, Savannah, and Galen, and a new program, Babies Belong at the Library, has grown out of Bright Red Bookshelf. These initiatives have involved volunteers of all ages in the three years since Tom’s application was approved. Donated books have been inspected, cleaned, and labeled by volunteers from senior homes and groups, along with several individuals in the community. A dedicated and diverse group of residents are regular read-aloud guests in UPK and Head Start classrooms. A new toddler age story hour is being offered at the Clyde Savannah Public Library. The Village of Clyde, the Public Library, and the Elementary School have each purchased and hung large, colorful “Read to Me” banners which encourage parental involvement. Each school year, the Technology classes at the High School build small bookshelves for UPK and Head Start children to take home and start their own personal libraries.

Since our model is one of grassroots change and improvement, the SOAR project depends on resident volunteers in the communities of Clyde, Savannah, and Galen. We seek and welcome community members’ passions, insights, and ideas for fostering long term health, economic development, and beautification of the environs.

With Bright Red Bookshelf and many other resident projects underway and going strong, this story is predicted to have a happy ending!